I was concerned awhile ago about the rats out in the pen where the chickens are but I have been noticing more and more droppings out in the garden shed as well.  I call it the garden shed, it is more of a dumping area for my garden stuff like the mowers, seeds, chook-food, tools, pots, crap...There is no organisation and anything is anywhere.   There are 2 bench areas at the back, hard to get to because I have dumped stuff in front and these have become covered in droppings.  Big mouse, small rat, something not wanted either way.

But we have bandicoots here and skinks live in this shed so as poisons and snap traps were out I have been hunting around for humane traps that catch the *whatever* alive. 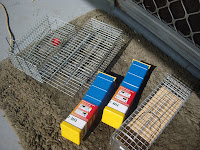 I bought the 2 wire cages on the left first, $14+ each.  I was told that they were the last 2 and they wouldn't be selling that type again which was a bummer as they were the ones I wanted but I have found a shop in Pinjarra that sells them but they are a few dollars more.  I will pay the extra and get a couple next week, just to save  searching around for longer.  The 2 coloured ones in the middle are mouse traps from our hardware store, they were under $5 each and the mouse trap with the wooden floor is from the rural supplier in town here, $10  It works on the same principle as the first two but doesn't seem as strong and has a wooden bottom whereas the others seem better with a wire bottom.  Much easier to clean.   So at the moment we have 5 traps, all easy to set but the plastic mouse ones are a bit of a trap themselves as they go off but we can't see what, if anything, is inside them.  I want to know what I am picking up even if it makes me squeal.

The first week I had the wire traps set up in the shed and we caught 3 rats... Hubby was  home so he dealt with them.  He thought he had some rats in his shed too so put one of these traps in there and caught something on the second night. 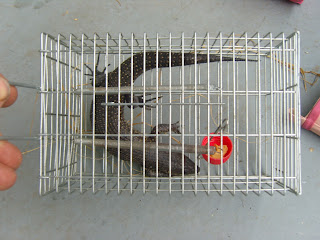 Not a rat and just as well it wasn't a snap trap or this little thing would have been *snapped*
He has been taken out the back and let loose.
If I am home alone and I trap a skink then I'll let it go out the back.  If it's a mouse or a rat I will...Don't know what I will do with it.  If I can bring myself to pick up the trap with a live rat in it then I will probably, maybe, take it down the road and let it out.  I'd have to make sure that there was no-one around as I know there will be some squealing and carrying on going on.  They are small rats and kinda cute too...But they do gotta go...somewhere, somehow...

I need to buy a few more traps and set them up in the chicken pens as I know there are rats out there and maybe be a bit more careful when getting the chookfood out.  Spilt chookfood brings rats and mice and rats and mice brings snakes...Rats I can handle but I'd rather not encourage more snakes.
Posted by Barb. at 9:38 PM