It's that time of the year when the area outside the backdoor is covered in fallen Passionfruit.
We have a wonderful vine out there, the best producer of  the 5 vines we have.  Though the fruit are smaller than the vine over the pigpen we get more of them. 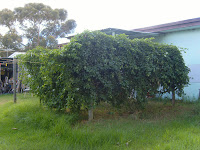 Grandaughter was out here a couple of days ago and she helped pick up a couple of bags worth.   They are nice fresh but there is only so many we can eat plain.  The son sometimes has a few but never enough.  I do freeze them and give some away but still have heaps.

I am going to make up some cordial but we don't drink a lot of cordial here.
I'm a water drinker and Hubby drinks Coke.

I have been experimenting with making a pudding out of them.  I am onto my third try and it is good.  Hubby thinks it could be a bit sweeter but he's a Coke drinker so what would he know.

He could be right though, I usually add way less sugar than recipes call for and think the stuff still tastes OK.

I have modified my chocolate pudding recipe which was modified from a Yogo recipe from the SimpleSavings site. 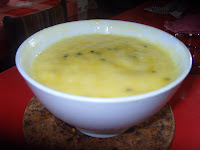 This time I used 200ml of Passionfruit pulp, 2Tbs cornfour, 3Tbs sugar, just under 1/2cup skim milk powder, and 300ml.of water
Heat in micowave, stir, heat etc until it starts to thicken..
It gets a bit thicker as it cools.  Cool then gobble.
Use more or less pulp depending on the intensity of flavour you like.  I like it strong.  As in everything I cook/make it is all experimenting, no set recipes. 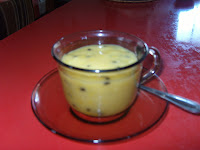 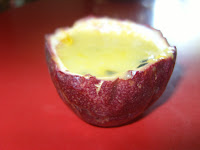 I serve mine in a cup, that holds 3/4 cup but if you had big Passionfruit you could use the shell of them.

I liked it.  DD said it tasted too much like Passionfuit but kept eating it out of the bowl.  Grandaughter wanted more then more again.
Posted by Barb. at 10:59 AM

Labels: In The Garden., In The Kitchen.