I have/had 2 Bougainvillea, planted as cuttings a few years ago but expected to die.
They didn't, they grew and flowered and were beautiful 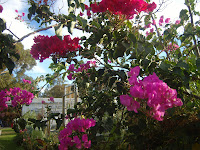 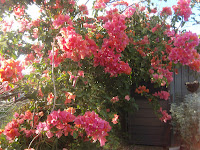 I really liked them but Hubby...not so much.  Mainly because of the spines on them I think.  And that in itself might not have been a problem if I didn't leave bits on the ground where he could tread on them.  But anyway, I loved them, he didn't, they were kinda getting out of hand and were too close to the door of the chookhouse.   And they had broken the fence that they were up against and the chooks were getting out and digging up my gardens.
So, great idea, cut them back and fix the fence, maybe in a few weeks when it is cooler I could dig them up and shift them to the front fence, out of the way.

So last Monday I started.  What a bleedin' job.  I cut and pruned and ditched half of these plants and was working on getting the fence tied back together.   I was  ready to finish the job on Friday and Hubby offered to help.  Good, at least the job would get finished.


But, Change Of Plan!    We decided to get rid of the fence altogether, dig up all the ratty plants I had out there and open up the area in front of the house...which means that if I wanted to keep these 2 plants then now was the time to dig them up and transplant them.   I have done 1 and the other will be done tomorrow.

They may survive, I hope they do.  They added some much needed colour to the place.
Posted by Barb. at 2:03 PM

Labels: In The Garden. Planting.