I am a coffee drinker.  The second thing I do in the morning after getting up is have a coffee.  Hot.  Strong.  Bit of milk...I have a couple throughout the day and I like one sometime at night before bed.

When it is hot though I prefer a strong white tea during the day.   Well did anyway, up until a month or so ago. We read something about Rosehip tea with blackcurrant juice added being good for iron.  One daughter went shopping and brought me back some Rosehip tea and juice.  It's nice.  Another daughter came for a visit and brought some Stinging nettles to make tea with.   It was nice with just a touch of honey...   Now as there is only so many cups of tea that I can drink in a day I started mixing them together.

I put 2 cups of water in a jar and nuke it 'til it starts to bubble.  Take it out and add a Rosehip teabag and a teacage of Stinging Nettles.  Pour in a slurp of Blackcurrant juice.  Makes 2 cups.  I have one hot and the other warm.   SO NICE!!!   I try to have 2 jars a day.


This is the first lot of tea in it's bag.  It is finely chopped.  *They* tried to get me to put my hand in and feel it but I know them and knew they were up to something.  This stuff stings/itches you if you touch it just like the living plant does.  It loses that once the hot water has been added.   I was told that this stuff can be added to soups and cooking too.

A cup of Stinging Nettle and Rosehip tea.
From jar to mug...just for me.
I was getting low on my supply but the SN DD had found a source for Organic Stinging Nettle Tea and we were awaiting her order.  She brought the bag around last Friday..  Below is me (on my birthday!) with the bag.  A massive bag with a kilo of dried Stinging Nettles in it.   The jar that I had ready was not going to be anywhere near big enough for my half so I had to take stuff out of others...I now have 3 big, 500gm, coffee jars full.  This tea is not as finely chopped as the last lot but we all, well the three Stinging Nettle Tea drinkers, had a cup and it tastes the same so no problems with that. 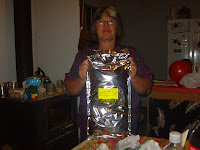 I don't know how this $30 a kilo tea compares to the shopbought black tea leaves pricewise but I think this will be my main tea from now on.

It has been said that I am *not allowed* to grow the SN here so buying it this way is what we will do.
Posted by Barb. at 8:14 AM