On my mind today is something that Rhonda Jean puts on every week and today Flippin' Foxs' is on my mind.  Not actually flipping them though I would like to flip them to the bottom of the river but fox proofing a pen is on my mind. As the pen in question has not had a problem with any fox before we thought that it was alright and safe.  But no...this fox has come up into the yard and dug up my garden and gotten in under the fence and killed 2 of my AussieRocks.  The chooks I get the fertile eggs from. 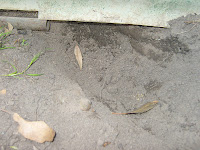 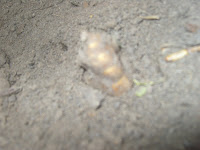 The bleedin' thing even dug up my Jerusalem Artichokes and I was already starting to worry about those not growing.

Maybe I thought they wouldn't come in this way because we are in the area throughout the day so our people smell would be around, dogs run around this area, it's close to the house...All reasons that mean jack!
I probably made it easier for them as I cleared an area to plant the JA so it is soft plant free area...

So today we will be digging trenches and burying tin to try and stop them digging under again.

I have such a long list of other stuff that I need to get done but that will all be put off until we get this pen sorted.

I will also need to choose a few more chooks to put in with the rooster (*roosters?) as the lone definate chook that is left in there is looking a bit stressed.  As you would I supose if you see/hear your friends getting attacked...


* roosters?   I have 2 big birds in this pen.   One is definatly a rooster and always has been.  The other...it has always been a big bird, part Plymouth Rock, but lately, after 2 years, it has started crowing so I do not know if it is a he or a she.  Maybe it doesn't know itself...
Posted by Barb. at 7:10 AM